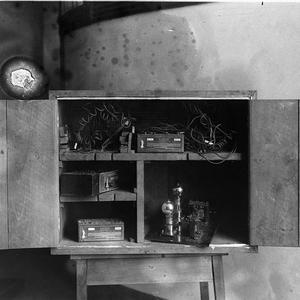 Notes: This sound-on-film process was the first system to record sound and picture on the same film in Australia, it was first used to record the opening of Parliament House, Canberra, by the Duke and Duchess of York in 1927. Walter Sully, camerman, Charles Ward, sound engineer, and Ted Hood, assistant and stills. A State Government Minister, TJ Ley, was a director of De Forest Phonofilms (Aust) Pty Ltd, (he died in Dartmoor Prison after being convicted of murder). Dr De Forest sued the Western Electric Company (USA) for infringement of his patent, but he lost the case." (Ted Hood, 25/11/1988). Digital order no:hood_08029