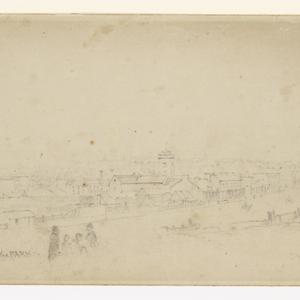 Notes: This pencil sketch is similar to the lithograph that was published in 'Sydney illustrated'. It was titled 'Sydney looking north' and appeared in Part IV of the series in 1844. A full description of the image has been given by John Rae in 'Sydney illustrated', ML Q981.1/P. In his description he states, "The Parramatta Road, which is the grand entrance to Sydney from the interior, crosses the picture in the foreground, from the left to the ornamental building ... In front of this building the Parramatta Road stops, and merges to the left into Parramatta Street ... and to the right branches off into Pitt, Castlereagh and Elizabeth Streets." The church is Christ's Church, in the parish of St. Lawrence. In the sketch the church has no spire, which it didn't in 1844. In the published lithograph, Prout has been more expeditious and added the spire. The image was also published under the title of 'The city of Sydney, N.S.W. from the Government Paddock, Parramatta Street'. The 'park' or 'government paddock' is Cleveland Paddock, where Central Railway Station now stands.