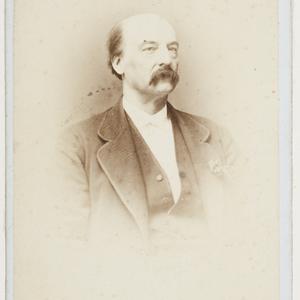 Out of copyright : created before 1955

"Old Snipe Nose" -- in ink on the reverse

Allen was a chorister, organist, and conductor in England, Ireland, and Australia. He managed a comic opera company, performing numerous operas in New Zealand, Australia, and India (1874-76), before returning to England. In 1874 his opera bill in Wellington, New Zealand included that country's premiere of Burnand & Sullivan's Cox and Box. (Allen's Royal English Opera Company featured Alice May as its prima donna. He and Miss May were widely reported to be married but that was not strictly the case.)

Allen composed at least four stage works, three cantatas, and many songs. His stage works included Castle Grim (an opera with words by Robert Reese, produced at the Royalty Theatre, London, 2 September to 21 October 1865), The Wicklow Rose (an Irish comic opera by Reese, produced in Manchester, 3 May 1882), Keep Your Places (a operetta by Reese, St. George's Hall, 15 February 1886), and The Viking (an unperformed five-act opera).