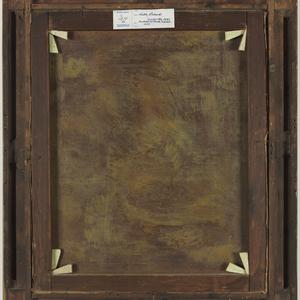 A framed portrait of Sarah Scarvell, nee Redmond, showing her face and upper body. Her left hand rests on an open book and she is dressed in a dark two-piece dress with a broderie anglaise and lace under-bodice. The front panel of the under-bodice is attached at the neck with a diamond brooch

Signed and dated 'Richd. Noble 1855' at bottom right of portrait

Wooden frame, which matches the frame of the portrait of John Larking Scarvell (ML 1250), has been over-painted. Unclear if it is the original frame.

Acquired from a branch of the Scarvell family, June 2010.

Paintings from the Collection

Sarah married Captain John Larking Scarvell (1791-1861) at St James's Church, Sydney, in March 1828. It was the second marriage for Captain Scarvell. His first wife, Isabella (nee Campbell), had died at sea and was buried in St Philip's Church, Sydney, in January 1828. Captain Scarvell retired from the East India Company shortly after his marriage to Sarah and they resided at Clare House (Killarney), in Oakville, N.S.W.. They had ten children, of whom eight survived infancy.