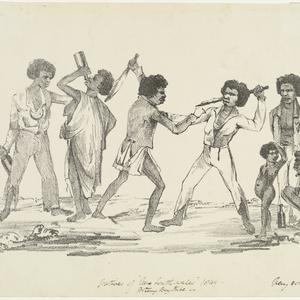 Notes: Other versions of this lithograph are also in the Mitchell and Dixson Library collections: see PXD 615/37, DL Pd 30, and B 1106 (tipped-in frontispiece). However this version is reversed, and even more crude. The fighting couple on the left were also used by John Carmichael in his etching (he claimed it was his design) "Male & Female Black Native", which was published in James Maclehose, "Picture of Sydney, and Strangers guide to NSW", Sydney, 1839 The initials P.D.V. may relate to Phillipe de Vigors, who drew and initialled two drawings, both dated 1849 - "At Botany Bay NSW" (SSV/40) and "Convicts Letter writing at Cockatoo Island" (SSV/39). de Vigors also owned a lithograph "Black Fellows", which he inscribed and signed. This is now held by the National Gallery of Australia (accn. no. 86.2229) and can be seen on the Gallery's Australian prints website : www.australianprints.gov.au. Colour transparency digitised 2000 This lithograph had been previously offered by Deutscher Fine Art, October-November 1983, catalogue no. 15 Digital order no:a1528625