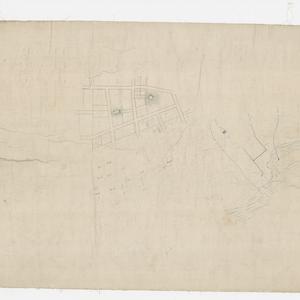 Notes: Relief shown by shading. Area: from Wyndham Street to the Baptist Garden beyond Young Street, and from Cleveland Street to south of McEvoy Street. Map shows named and unnamed roads and streets, measured allotments, base outlines of buildings, landowners, creeks, a mill, Baptist Garen, and woolwashing area. Title supplied by cataloguer. Dating: [between 1830 and 1890]: John Thomas Baptist opened his nursery in Redfern in the early 1830s (from the City of Sydney website) and other maps show this area being subdivided through to the 1890s. Transferred from: with maps: drawer B9. BRN539526. Mitchell Library copy: [W Plans]: "W88."