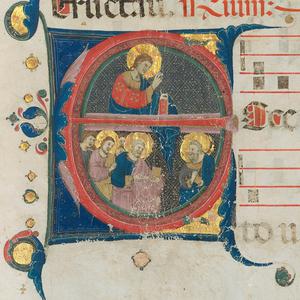 Access: Rare Books copy at SAFE/ RICHARDSON/ 273 : Supervised access only by appointment through Manager Access & Information. To preserve the manuscript on vellum, the microfilm at RAV/FM4/1100 will be issued.

Notes: 155 folios in gatherings of ten folios: I-VI (10), VII (8), VIII-XI (10), XII (8), XIII (9) lacking fol. 126, XIV-XVI (10). 21 decorated initials with designs of leaf or vegetative forms in blue, red, yellow, green and grey. 8 historiated initials in same colours with gold leaf. Black square notes on four line red staves, 5 staves to a page. Black gothic letters with rubrics and some Roman letters probably introduced at a later date. Bound in oak boards 12 mm thick, with calf spine. Library's copy is accompanied by a folder containing a detailed description of the volume by Professor Robert Gibbs, Glasgow, extracted from the catalogue of the Neri da Rimini exhibition, held in Rimini, 1995. Also in the folder are two letters referring to the exact date of the manuscript having been found when it was examined after the exhibition. Exhibited in the Nelson Meers Foundation Heritage Collection April 2007 - March 2008. Rare Books copy: Has "P. A. Bernadet" (16th or 17th century) inscribed on fol. 119. Inside front cover is an extract from an English bookseller's catalogue, September 1924. On fol. 2 is inscription "Don Richardson 1928". Rare Books copy: Part of the Richardson Collection, bequeathed to the Library by Nelson Moore Richardson in 1928, and with his name and address inscribed inside front cover.

To preserve the manuscript on vellum, the microfilm at RAV/FM4/1100 will be issued.