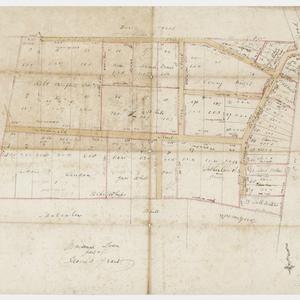 Notes: "The area was originally part of a grant made to Irishman, Nicholas Devine. Devine built his homestead on the corner of Erskineville Road and George Street. A Mr Macdonald, who owned a large ironmongery at the corner of George and Market Streets in the city, lived near the present Macdonaldtown station and was a major property owner here. He must have had good standing in the area because when the railway station opened in 1855, it was named Macdonaldtown. The suburb covered a large area in those days including the land that is Erskineville today. Macdonaldtown was incorporated as a local government area in 1872. Erskineville became a separate suburb in 1893."--(Australian suburb guide: http://www.suburbguide.com.au/category/area-info/location/s-macdonaldtown). Area: From [Victoria Street] to south side of Coulson Street and from [Union Street] to [Eve Street]. Holograph, signed, "W. H. Wells" Shows measured and numbered allotments with owners names; named streets and bordering estates and grants. Part of the Reuss collection. Selected for Digitisation 2013.