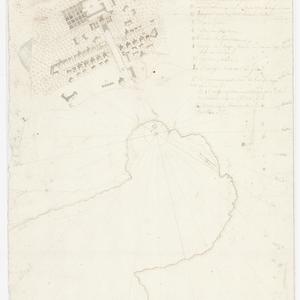 Access: To preserve the paper copy the aperture card will be issued.

Notes: "The Boudeuse and the Etoile entered Kayeli Bay, at the eastern end of Buru, and anchored on 1 September 1768. Dutch soldiers came on board to ask Bougainville the purpose of his visit and to inform him that only Dutch ships were allowed in the harbour. Bougainville told them they were in desparate need of provisions and that Buru was the first port they had reached. The Resident, Hendrik Ouman, asked for this in writing, which Bougainville immediately provided. The French were then able to spend six days ashore during which their sick were treated and they purchased oxen, sheep and poultry for the next leg of the voyage. The ships left Buru on 7 September and headed west along the north coast of the island"--Pacific Explorers Library. Attributed to Giraudais by a note found with the map. Map has "legende" of buildings and locations shown on map. Shows bay and anchorages, village, buildings, roads and vegetation. Shows Kayeli Bay and settlement, Indonesia in 1768. Mitchell Library copy at M1 479.99/KAVELI/1768/1: photographic reduction : 16 x 25 cm. Mitchell Library copy at Z/M2 479.99/KAVELI/1768/1: Acquisition details available. Selected for Digitisation 2013.