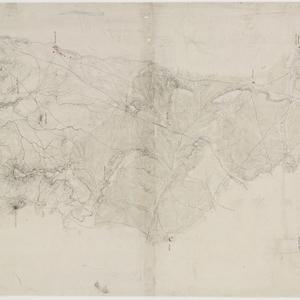 Notes: 1. Rear of the French position at the battle of Salamanca, 22nd July 1812 -- 2. Front of the position of the Allied army at Salamanca, 22nd July 1812 -- 3. [Section including Alva de Tormes] -- 4. Rear of the British position at Salamanca, 22nd July 1812 -- 5. Salamanca. Finished map published by James Wyld in his atlas: "Maps and plans: showing the principal movements, battles & sieges, in which the British army was engaged during the war from 1808 to 1814, in the Spanish Peninsula and of the south of France". Ink and wash, with pencilled bearings etc. used in constructing the maps. Colours. Map no. 3 of a group of five manuscript maps that provide the basis from which Mitchell's printed map, Battle of Salamanca, fought on the 22nd July 1812 was drawn up. They cover the whole of it on approximately the same scale like a patchwork laid at different angles. Maps 1, 3 and 5 in the list below have the same orientation as the printed map, with 130° to top of sheet; no. 2 has 120°E and no. 4 has 80°E. No. 5, smaller and more finished than the others, has a key to place marked in the town of Salamanca indicating the gates of the town and the places and some of the circumstances of Mitchells many billetings in that town, 1812-1815.

Additional physical form availability note: Online images available via the State Library of NSW at: http://digital.sl.nsw.gov.au/delivery/DeliveryManagerServlet?embedded=true&toolbar=false&dps_pid=IE3539839 ; Digital Order No. a1528546.

Wyld, James. 1812-1887. Maps and plans showing the principal movements, battles & sieges, in which the British army was engaged during the war from 1808 to 1814, in the Spanish Peninsula and of the south of France.