Skip to main content
SLNSW-Official commemoration and wreath-laying for Abor...-92eJAWxY 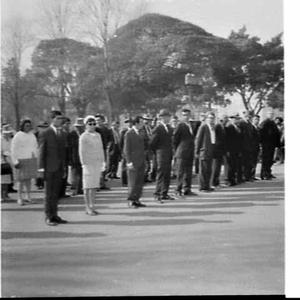 Notes: The Aboriginal Ex-Servicemen of N.S.W. made history in July when they took part in the first all-Aboriginal Commemoration Service at the Anzac War Memorial, Hyde Park, Sydney. The ceremony was part of the National Aborigines' Day and was held to honour the participation of Aboriginals in the Defence Forces fighting for their country in major wars. Led by Captain Reg Saunders, a group of nearly 40 Aboriginal Ex-Servicemen assembled in Hyde Park and then marched along the main Park Avenue to the Memorial where they were inspected by the Lieut-Governor of N.S.W., Sir Kenneth Street. Source: Reveille, 1 August 1969, page 15 There are four negatives in the original envelope not included on the videodisc. Digital order no:d7_31669

Copyright status : Taken by Australian Photographic Agency for account: News 690480. Reproduction for purposes other than private study or research will require permission.