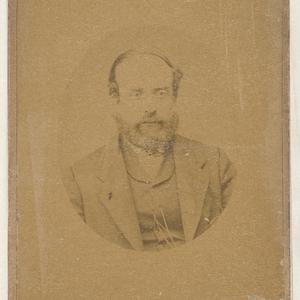 Pattie 'Thomas Edwards' -- in ink below the photograph

THOMAS EDWARDS OF SCILLY, JOHN PAYNE, MASTER, BURTHEN 165 TONS
FROM THE PORT OF MAURITIUS via MELBOURNE TO SYDNEY, NEW SOUTH WALES, 26TH SEPTEMBER, 1868 (Alexander Pattie was the master of the ship in 1868)

Reference:
Mariners and ships in Australian Waters. http://mariners.records.nsw.gov.au/ (accessed May 10, 2010)...