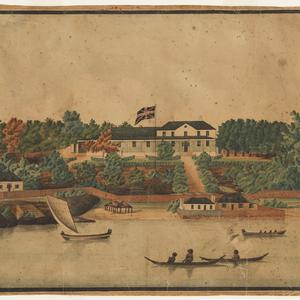 Notes: ca. 1807 (dated from design of garden, which was said to have been re-modelled by Governor William Bligh and his daughter Mary Putland in ca.1807 Reference: H. Proudfoot et al., Australia's First Government House, 1990 p.90 (Ref.1/994.4102/11 Mitchell Library). In this drawing the garden appears to be more developed than in Eyre's earlier drawing "View from the West side of the Cove" which is dated 1806 (DG XV1/26 Dixson Galleries). However there is little sign of the garden in John William Lewin's depiction of the house in his "Sydney Cove" which is dated 4 September 1808 (ML 60 Mitchell Library). It is possible that during 1808, when Governor Bligh was confined to Government House by the rebel administration, and refused servants, that the garden he and his daughter planted, died.) Vendor acquired drawing as part of a mixed folio of prints and drawings at an English West county auction sale ca.1993. The vendor has been unable to trace the provenance further back than this sale. A very close (faint) pencil drawing, probably by John William Lewin, is on the reverse of a watercolour of a hibiscus - one of a collection of botanical studies commissioned by Governor King ca.1804-05 Reference: SAFE/PXC 304 f.104 Mitchell Library Pictures Section. Colour transparency digitised 1998 Digital order no:a128359