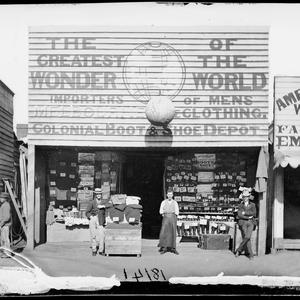 Notes: LR plan #45 Ref. "Gold & silver" 1953, p.161 "The Greatest Wonder of the World - importers of men's clothing; colonial boot & shoe depot" - Mayne Street, between the Golden Age Hotel and the American Tobacco Warehouse. Simeon Moses the proprietor is most probably the man in the centre of the photo. His brother Menser Moses from the American Tobacco Warehouse next door, Home & away - 38789, sits on the right. When Simeon Moses left Gulgong in 1873 to take over the Royal Hotel in Mudgee, the Greatest Wonder of the World was taken over by his other brother Abraham Moses. -- Information supplied by Baldwin & Davis, Research Gulgong (July 2006) Robert Robinson bought this building from Moses when he left town and it was renovated to become the new Post Office. Just after it was completed the Government ordered the Post Office to be moved to the Telegraph Station in the Police Compound. -- Note supplied by Baldwin & Davis, Research Gulgong (Sept 2006) Man leaning on the clothes previously identified as M.A. Halpin (Home & away - 41207) Digital order no:a2822094