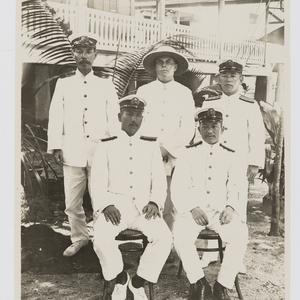 Notes: "At the outbreak of the 1914/18 war the Marshall Islands were part of the German Empire. The centre of German Administration and trade was the port of Jaluit. At the outbreak of war the British Government asked the Australian Governmetn to occupy German possessions in the Central Pacific - specifically New Guinea, the Marshalls, Carolines and Marianas. While the Australians (with a limited navy) were busy in New Guinea the Japanese decided to occupy the various islands as a precautionary measure to protect their own shipping routes. In 1917, to the annoyance of Australia, the British Government agreed to support a Japanese claim to retain possession of these islands when Germans had been defected. The Photographs in this collection were taken in 1916/17 when the Japanese had been administering the region for more then two years." - Foreward to the contents list