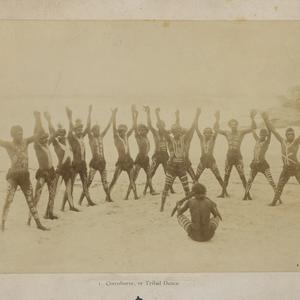 Notes: Title from Printed Books catalogue entry Typed caption below each photograph and a title printed on most photographs "Kerry & Co. photo. / 308 Geo St Sydney / Copyright" -- blind stamp on majority of photographs "Kerry Photo Sydney" -- printed on majority of photographs Some of these individuals from Queensland were members of "Meston's Wild Australia", who appeared at Bondi Aquarium in Jan 1893. See Sydney Mail 21 Jan 1893 The troupe of 22 males, five females and a boy were also photographed by Henry King (in Sydney) and William John Lindt (probably in Melbourne). For identification of the Aborigines in Meston's Wild Australia troups, see also: J.W. Lindt "Australian Aborigines 1893", an album of 51 albumen prints held in the Museum of Mankind, London and listed in The Winston Churchill Memorial Trust of Australia Report by Alan Davies, 1986, page 75, and, Australian photographs [picture] / by Henry King. [no publication details, before 1893] - album of 20 photographs (ML Q572.9901/K) Charles Kerry and Henry King negatives are held at the Powerhouse Museum, Sydney and the Macleay Museum, University of Sydney The bora ceremony photographs were photographed by Kerry near Quambone NSW in 1898. See Charles Kerry 'Exhibits' in Journal and Proceedings of the Royal Society of NSW vol XXX111, 1899 Digital order no:Album ID : 823573