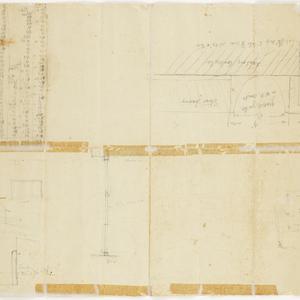 Rights and Restrictions Information : No reproduction without prior written approval of copyright holder

One blueprint sheet of architectural drawings by architect Sydney Ancher for a house, later known as “Windy Dropdown”, to be built at North Curl Curl. The sheet contains the floor plan, four elevations, one section and a site plan. On the reverse of the sheet are calculations and sketches for the construction of the house, written in pencil.

Sydney Ancher (1904-1979) was a Sydney architect who had a significant impact on the establishment of modern domestic architecture in Australia. He was a founding partner of renowned Sydney architectural firm Ancher, Mortlock, Murray and Woolley.
In 1947 he was commissioned by Mervyn Farley, of Farley and Lewers construction and quarry business, to design a family house on land in the Windy Dropdown Estate at North Curl Curl, on Sydney’s northern beaches. The design, in Ancher’s mid-century modernist style, was flat-roofed, a feature which caused its rejection for building approval by Warringah Shire Council in 1948. An appeal to the Land and Valuation Court resulted in a ruling in favour of Farley, linking the advancement of architectural design with general cultural progress. The house, known as “Windy Dropdown”, was sold by the Farley family in 1998 and remains intact, with some later renovations and additions.