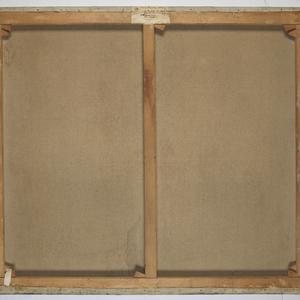 Copyright status : In copyright - Life of artist plus 70 years.

A domestic vignette of an Australian family mourning the death of a close family member who served and fell in the First World War. Image depicts an older bearded man pointing at a map location to a young boy holding a Union Jack, and female figure dressed in black with her face covered in her handkerchief.

Quick March! The Children of World War I

Anthony Dattilo Rubbo (1870 - 1955) was born in Naples and received classical art training in Italy. He arrived in Australia in 1897, and over the next couple of years established himself in Sydney as the major competitor of Julian Ashton. He taught at a number of Sydney private schools and was the most popular instructor at the school of the (Royal) Art Society of New South Wales. At the turn of the century his flat near the Bulletin offices was a meeting place for Sydney's Bohemian community. Grace Cossington Smith, Roland Wakelin and Roy de Maistre were all Rubbo's students, and the first modern paintings in Australia arose from Rubbo's openness to new ideas. In 1924 he helped to found Manly Art Gallery and Historical Collection (to which he donated over one hundred of his own works) and the Dante Alighieri Art and Literary Society.

This scene by Anthony Dattilo Rubbo was painted the year of the Gallipoli campaign, and illustrates the impact of the First World War on the Australian home front and on individual families. The figures in the scene are unknown, but represent the everyday Australian family who were affected by the War.