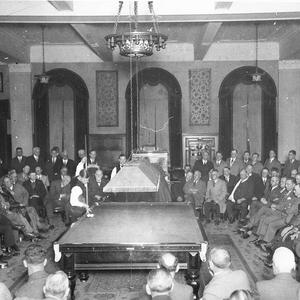 Notes: Sydney Exposures exhibition caption: Genius with a cue, Sydney, 7 July 1934 : World champion billiardist Walter Lindrum executes a difficult masse stroke on the table at the Tattersalls Club, while a glum ex-world champion Joe Davis looks on. Two years previously, Lindrum had beaten Davis for the title, with a world record break of 4137 points in 2 hours 55 minutes. The rules of the game were changed in an attempt to overcome Lindrum's dominance of the sport, but to no avail. He retired undefeated in 1950. Digital order no:hood_04246