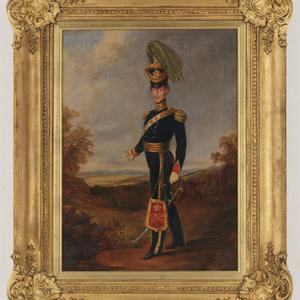 Copyright status : Out of copyright - Creator died before 1955

1 oil painting on canvas in a gilded wood frame. A full length portrait of Major James Winniett Nunn, of the 80th Regiment of Foot, Commandant of the New South Wales Police, with a landscape of New South Wales in the background.

Nunn was probably part of the 5th Irish Lancers whose uniform is distinguished by the great flowing green head-pie...

Possibly painted by Joseph Fowles. While the painting is not dated or signed, it does depict Nunn in NSW. It is possible that it was painted in England, though the attribution to Joseph Fowles is credible.

Undated.
Date range based on Nunn's arrival in colony in 1837 and his appointment as Colonel in 1846.

Label on verso of painting.

Paintings from the Collection

Nunn arrived in New South Wales with the 80th Regiment of Foot which was garrisoned from 1837 to 1844. In the same year he became the commander of the NSW Mounted Police, and in December 1837, it was reported that Aboriginal warriors had attacked and killed stockmen on properties beyond the limits of settlement in the Namoi River district. Nunn was dispatched with two sergeants and twenty troopers and on 26 January 1838, near the Gwydir River, his party was attacked and a corporal wounded. In retaliation the troopers opened fire and a number of Aboriginal people were killed. The Mounted Police then pursued the Aborigines and engaged them again, killing more. The event is now known as the Waterloo Creek Massacre.

He was made a Lieutenant-Colonel in the Army in 1846.