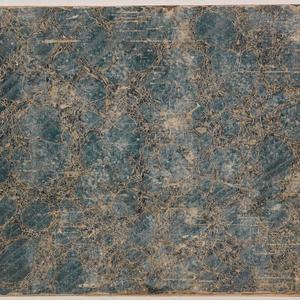 Notes: Although unsigned, the sketchbook has been always been attributed to Edmund Blacket by Blacket family members. The sketchbook dates from his voyage to NSW in 1842. There are two Bahia (Brazil) sketches dated August 1842, and then it moves to NSW on 9 November 1842. Blacket arrived in Sydney on the Eden on 4 November 1842. The last dated drawing is 19 December 1842. Confirmation of his authorship can be determined by comparison with entries in Blacket's shipboard journal "A journal of a Voyage from London to Sydney, 1842" (B 1596). On 12 August 1842 he notes "I went early this morning to take a sketch of a door of a church, for they excel in doors before all other parts of the building. Also, I finished one that I had begun of the Convent of Theresa." Both these drawings are in this sketchbook. Comparison with the lettering of watercolours in both the sketchbook and the journal also confirms a common hand. -- From Curator's notes, Feb 2004 No.18 identified from "Dr. Fullerton's Church, Haymarket, 1870" (SPF/48) Digital order no:Album ID : 824206