Skip to main content
SLNSW-[Governor Arthur's Proclamation to the Aborigines...-YK5Qpgjn 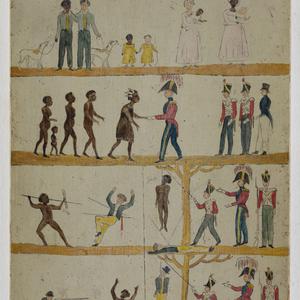 Notes: Incorrectly labelled as Governor Davey's proclamation, this work actually depicts Lieutenant-Governor Arthur's proclamation of c.1828-1830. Originally conceived by George Frankland as a way of communicating the proclamation to Aborigines so they would understand how it affected them, his original drawing was reproduced onto boards in 1830 and then mounted on trees in remote areas where Aborigines would see them. The Tasmanian Surveyor-General's Office later produced lithographic reproductions of the originals, and these too were incorrectly titled as Governor Davey's, the mistake being also perpetuated in subsequent copies. Thus the boards and lithographs came to be popularly referred to as Governor Davey's Proclamation, despite that being an error. Source: Dictionary of Australian Artists / Joan Kerr (Ed.). Melbourne: Oxford University Press, 1992 For further details of the conception of the painting, see the entry on George Frankland in Dictionary of Australian Artists / Joan Kerr (Ed.). Melbourne: Oxford University Press, 1992 For information about the provenance of this board, and the existence of other reproductions, see ""Notes on A Message to the Tasmanian Aborigines in 1829, popularly called 'Governor Davey's Proclamation to the Aborigines, 1816'"" by John Morris in Australiana, August 1988, Vol. 10, No. 3, pp.84-87 For further notes and references about the date of creation of this board and another lithograph held at DG V/2 - DG V/3, see PXn 19 & PXn 704. Microfilm copy available at MAV/FM4/2338, frame 78 Digital order no:a928138

Oil painting on huon pine board, rectangular in shape with rounded corners, with a hole at top centre for suspension, depicting four scenes: