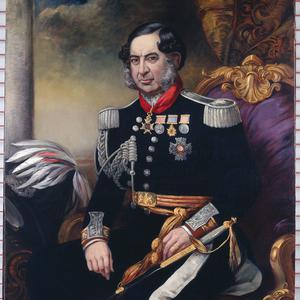 Notes: The painting is mentioned in Bells Life in Sydney on 27 January 1855 p.2. Smith offered the painting as a prize in an art union or raffle in 1856, where he valued it at 84 pounds: Sydney Morning Herald 13 May 1856 p.8. The donation of the portrait to the Free Public Library by Mrs J.G Raphael is noted in the Sydney Morning Herald of 3 March 1879 p.4 The donation is also noted in the Sydney Free Public Library Annual Report for 1879-80 p.5. This portrait was painted a year after Governor FitzRoy received his knighthood. The medal of Knight Commander of the Bath (KCB) is displayed prominently on a scarlet ribbon that hangs around FitzRoy's neck. Date source: The dictionary of Australian artists / ed. Joan Kerr. Melbourne: Oxford University Press, 1992 This painting is close to a daguerreotype photograph of Sir Charles A. FitzRoy with his aide-de-camp, ca. 1851, reproduced in Sierp, A., Colonial life in Tasmania : fifty years of photography, 1855-1905. Adelaide : Rigby, 1976. It is not known where the daguerreotype is held. Digital order no:a128371