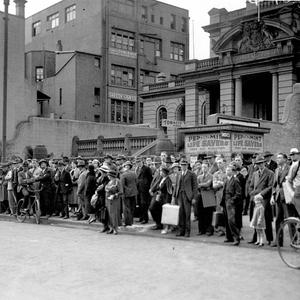 Notes: Taken by Ted Hood, c.1930, when employed by his father, Sam Hood, on 3 pounds ($6) per week. The pictures were mainly to service the "Argus" and the "Australasian" in Melbourne. Sam Hood was the Sydney representative for these two publications. The "Argus" was a broadsheet morning daily and the "Australasian" was a rural illustrated weekly which also covered the social doings of the upper strata of the society of that day. Originally said to be crowd listening to cricket broadcast in Pitt Street, but one of series published in The Labor Daily as Melbourne Cup broadcast Digital order no:hood_01082