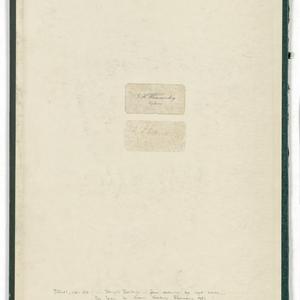 Notes: Microfilm - CY 2629, frames 1 - 137 (PXD 960) This collection of prints were owned and possibly compiled by G.H. Hammersley. Nos. 1-5, 12, 85-86 are missing The artist, Preston, is printed as ""Presston"". No.24 has pencil inscription at lower right that is difficult to discern. No.21 a similar copy is located in the Mitchell Library at SV1B/Blu M/21 No.36 appears in T.L. Mitchell's, Three expeditions into the interior of Eastern Australia (opposite p. 192, 981/M). No.41 was removed at an unknown date at placed at SV*/Hors/2. Another copy of this print is located in the Dixson Library collection at DL Pe 239. Nos. 54-69 are based on drawings by S.T. Gill. No.56 is damaged with a section of the print missing. No.76 is similar to an engraving of Bennelong by Collins but reversed and the weapons surrounding the medallions differ. Another copy is held in the Dixson Library collection at DL Pd 769. ""D.S. Mitchell"" signature on plate affixed to cover of old folder that contents was stored. Digital order no:Album ID : 824252