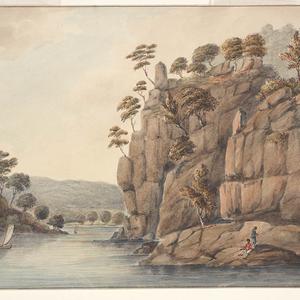 Notes: VOLUME 1 f.1 signed and dated in ink on reverse `G.P. Harris del 1809 Copyed by Jn. W. Lewin 1809'. A detached caption, inscribed in pencil `By Lewin after Harris 1800', accompanies vol.1 f.1. ff.3-6 signed and dated in ink on reverse `G.P. Harris delt 1808 Copyed by Jn.W. Lewin 1809'. ff.1-6 titled on accompanying scrapbook leaf. f.7 dated and titled on accompanying scrapbook leaf, with further note `named after the first Governor'. f.7 signed `G. W. Evans delt.' in ink on reverse at lower right. This watercolour was previously recorded as unsigned and was attributed to Lewin because others in the album are by Lewin after G.P. Harris. Evans' signature was uncovered by removal of a backing sheet during conservation treatment in 1987, negating the earlier attribution. VOLUME 2 f.1 unsigned and undated. Title, followed by note reading `drawn by Lewin', written in ink on accompanying scrapbook leaf. f.1a signed `R. Dobson' in image above base of branch f.2 signed and dated `I.W. Lewin. 1802. N.S.W.' at lower left. In lower left corner is a detailed sketch of a flower part. f.3 signed and dated `I.W. Lewin. 1802. N.S.W.' at lower centre. At lower left and lower right are detailed sketches in grey wash of two flower parts. f.4 unsigned; on scrap-book leaf to which sketch is attached is a note `by Lewin'. Undated. Untitled; title from list in portfolio. Along lower edge are four detailed wash sketches of flower parts. On the back of the scrapbook leaf is a watercolour sketch of a bird and flowers, signed `R. Dobson', but undated and untitled. f.5 signed `I.W. Lewin. New South Wales' at lower right. Undated. f.2-5 untitled; titles from list in portfolio. f.6 signed and dated `I.W. Lewin 1809' at lower right. Titled on scrapbook leaf to which sketch is attached. VOLUME 3 ff.1-7 are unsigned. Most are similar to views by or attributed to G. W. Evans and seem to be copies of them. The style is similar to that of Evans and it seems likely that the watercolours are by him and that most, if not all of them are later copies by him of his own paintings. See notes filed at PXn 265. ff.1, 2, 4-7 titled on accompanying scrapbook leaf. ff. 1-3b, 5 and 6 are undated; dated from ff.4 and 7, which are dated on accompanying scrapbook leaf. f.1 is very similar to `Sydney Harbour', an undated watercolour signed `G.W. Evans' (DG 153). It seems likely that the drawing in this volume is a later copy by Evans of his own work. f.2 is very similar to another watercolour, `A View of Part of Port Jackson...1807' held by ANZ Bank, a b&w photo of which is held at SPF/Sydney - Harbour & Islands, 1807. Two hand-coloured plates from Lewin's Insect book were taken from the reverse of the scrapbook leaf accompanying vol.3 ff.3a-b and placed with others in a portfolio with Printed Books f.3a is untitled; titled from comparison with other illustrations of Government House. f.3b is almost identical to `Govnt. House...1805', a watercolour signed `G.W. Evans' (ML 140). Undated; title date from ML 140; date of drawing from others in this volume. f.5 is similar to `Parramatta' (SV1B/Parr/9), a watercolour also attributed to Evans, but this sketch shows more detail and may be a later copy. f.7 is similar to `Windsor, Head of Navigation...' (SV1B/Wind/6), a watercolour also attributed to Evans, though this sketch appears to be a later copy as it is more detailed. VOLUME 4 f.1 signed and dated `G.P. Harris. delt. 1806' at lower right. f.2 signed `G.P. Harris delt.' at lower left. Undated. ff.3-6 signed and dated `G.P. Harris delt. 1806' at lower left. ff.1-6 titled along upper edge. On reverse of vol.4 f.5 is a wash drawing of a quill pen resting on an open book. f. 7 unsigned, undated; title and attribution to Mrs. Bellasis from note on accompanying scrapbook leaf. f.8a unsigned, undated, untitled. On scrapbook leaf to which sketch is attached is a note reading `by E. Grose'. f.8b unsigned, undated. Titled from scrapbook leaf to which the sketch is attached. f.9 unsigned. Dated and titled from inscription beneath drawing. It has been suggested that these albums were compiled by Lieut. Gov. William Paterson, who was in NSW from 1791 (apart from a break between 1796-1799) to 1810. See Early artists of Australia / Rex and Thea Rienits. Sydney : Angus & Robertson, 1963. The sketches when acquired by the Library were in a scrapbook which contained also fourteen plates from Lewin's insect book, fifteen plates from Martyn's conchology, and seven plates from a butterfly book. All the plates were extracted and catalogued for Printed Books catalogue. On the verso of the scrapbook leaves were prints from the Victorian era; these were left in place. Leaves to which the sketches were attached have been left with the sketches as many of them had contemporary titles written on them. Digital order no:Album ID : 823548

NOTE: For details of the artist of each drawing, see inscriptions and notes below.

VOLUME 1
f.2 "A Sketch by Lewin taken on the banks of Paterson River N.S.W. intended to represent the Colonels quarters for the night. The Colonel first discovered the river so named and is the figure leaning on his arm" -- inscribed in ink on reverse of scrapbook leaf accompanying vol.1 f.2
f.7 "The Front of Sydney Church / New South Wales....

In 1992 the watercolours were removed from acidic board and the secondary supports with contemporary inscriptions retained.

Watercolours have been separated from the scrapbook leaves to which they were originally attached and remounted in window mounts. The scrapbook leaf accompanying each drawing is kept in a sleeve on reverse of mount.

Mutiny on the Bounty : the story of Captain William Bligh seaman, navigator, surveyor and of the Bounty mutineers

The Artist and the patron

The work of art - Australian women writers and artists