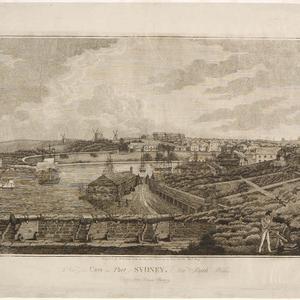 Notes: The Newcastle plates show a completed Christ's Church, which was finished in August 1818. However one drawing, "Vaulcuse Bay, Port Jackson" PXD 373/15, is inscribed December 1817, and "View of Sydney from the North Shore", PXD 373/4, shows Bennelong Point prior to the beginning of the construction Fort Macquarie, which was commenced in December 1817. For notes on the Library's copies of these engravings see ML MSS Aw 112 It is not possible to conclusively determine the artist of the views. Although Wallis claims to have made the original drawings in the imprint of many of the engravings, the six large plates (PXD 373/1-7) bear strong simialarities to the style of Joseph Lycett who is known to have worked for Wallis while they were both at Newcastle. The six small plates are less stylistically distinctive, and in inscriptions on the reverse of PXD 373/10 & 19 Wallis is said to be the artist of the original drawings. It is possible that Lycett was responsible for the six large plates and Wallis the six small. For references to the attribution question see Lycett and Wallis entries in Joan Kerr, Dictionary of Australian artists 1770-1870, 1992 : REF 1/Q709.94/87 Mitchell Library Digital order no:Album ID : 823526

These engravings were made in Australia under the direction of Captain James Wallis, of the 46th Regiment. They were first advertised in the Sydney Gazette of 9 January 1819 as a "Series of original Views of New South Wales". When Wallis returned to England in February 1819 he took the plates with him, where the set was published in London in Septe...