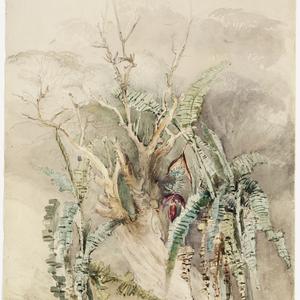 Notes: When received by the Mitchell Library in 1958, the drawings were mounted in an atlas folio with a broken cover but were subsequently re-housed and repaired by Messrs. Sangorski & Sutcliffe. Further treatment occurred in 1995-1996 when SLNSW Preservation Branch rebound the album. Transferred from Mitchell Manuscripts (D 390) in 1991. The drawings are dated from the period the Lowe's were in Australia, from 1842-1850. Many pages house several drawings. Nelson's Bay is now called Bronte. No. 5 is titled on mount in Georgiana Lowe's hand, ""Native climbing a gum tree"" No. 72b has been identified as Tempe House after comparison with Elyard, Tempe and Harris (Mitchell Library SSV/1A). Nos. 14a, 16a, 19c, 25, 36a, 40c, 50b, 60c were missing when received in 1959. The donor, Rear-Admiral Sherbrooke, is the great-great-grand nephew of Georgiana and Robert Lowe. -- Reference: Sydney Morning Herald, 20 May 1858. Digital order no:Album ID : 846166

When originally catalogued, the drawings were numbered according to the album page they appeared on, rather than a sequential individual number. Drawings with a sketch on the reverse have been renumbered.

For access to this pictures collection please submit your request through Ask a Librarian : - -