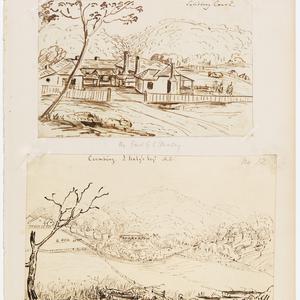 a. 'Salisbury Court' depicts the house on Salisbury Plain, surrounded by fence, with a tree in the foreground and hill in the background
b. 'Coombing T. Icley's Esq. M.C.' depicts the property, the house situated on the estate landscape, with fences, trees and some cattle in a distant paddock. Unfinished pencil drawing on verso, view of Icely's...

Both sketches are titled at top of image, pencil 'By G.C. Mundy' on album sheet below drawings, and pen writing on back of album sheet 'Gen'l Munday was Governor of Jersey Is. at time of death (1860). Ickleton ? Manor, Cambridgeshire, was family home & the scrap book was sold when furnishings of Manor were sold. All other pages have been sold - wen...

Godfrey Charles Mundy (1804-1860), sketcher, soldier and author, served in India and Canada before arriving in New South Wales in 1846 aboard the Agincourt to take up the position of deputy adjutant-general of the military forces in the Australian colonies. His cousin was the then Governor-General of Australia, Sir Charles Fitzroy, whom Mundy accompanied on tours around NSW. Mundy published 'Pen and Pencil Sketches, being the Journal of a Tour of India' (London, 1832). His Australasian excursions through NSW, Victoria and Tasmania resulted in the publication of 'Our Antipodes: or, Residence and Rambles in the Australasian Colonies, with a Glimpse of the Gold Fields' (3 vols, London, 1852). He illustrated this book with 15 lithographic plates; landscapes and scenes engraved by W.L. Walton from his own sketches and those by his wife, Louisa Mundy. He left Australia in 1851 and died in London in 1860.

Salisbury Court was the residence of Matthew Henry Marsh (1810-1881), a barrister, pastoralist and parliamentarian. He owned extensive land in NSW including Salisbury Plains, New England, where his home was completed in 1846. Conrad Martens also made sketches of this residence.

Coombing Park estate was established in 1831 by Thomas Icely (1797-1874), famed NSW landowner and stockbreeder. Godfrey visited him in 1846 and wrote of him: 'the great graziers and even the wealthiest landed proprietors of the Old Country may hide their diminished heads when compared with [Icely] in point of territory, stock, and numbers of persons employed'. William Lawson, (son of William Lawson, an ensign in the New South Wales Corps and explorer), married his Icely’s daughter Caroline on 10 May 1832 in Bathurst, New South Wales. He left this estate in 1862.