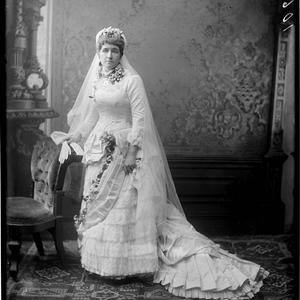 Notes: These sixtyfour dry and wet plate glass negatives, selected from the Freeman Collection, were digitally photographed in June 2003. Thirty of the photographs were printed for the exhibition `Freeman Studio' held in the The Picture Gallery, Mitchell Wing, State Library of New South Wales, 25 August 2003 to May 2004, to celebrate 150 years of their `Sydney Gallery of Photographic Art', later known as the Freeman Studio. Titled and dated by the Curator of Photographs, State Library of New South Wales, July 2003 Portraits in the Freeman and Co., Sydney, advertisement, 1900, identified in: The Australasian photographic review. Vol VII, No.7, July 21, 1900 p.27 Members of the Womanhood Suffrage League dated and identified from `Leichhardt : on the margins of the city : a social history of Leichhardt and the former municipalities of Annandale, Balmain and Glebe' / Max Solling and Peter Reynolds. St. Leonards, N.S.W. : Allen & Unwin, 1997 (p.147). The photograph was published in the Australian Town and Country Journal on 6 September 1902. Architect Lloyd Tayler identified from a portrait in The Building, engineering and mining journal, 25 Aug 1900 Digital order no:Album ID : 824062

Click here for a PDF version of the Gallery Guide "Freeman Studio in the Picture Gallery" http://acms.sl.nsw.gov.au/_transcript/2007/D00007/freeman.pdf

Freeman Studio in the Picture Gallery