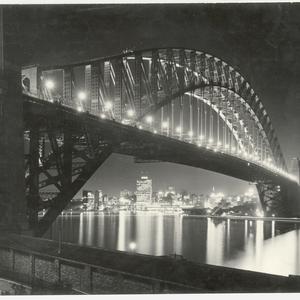 Rights and Restrictions Information : On behalf of Tourism Australia, the State Library of New South Wales is authorised to approve reproduction and use of all images in this collection, for publication and broadcast (all media), without further consultation.

1. [Bridgeworker Charlie Flood, who started work when The Bridge was commenced, surveys Circular Quay and Sydney from the top of the Arch], 1961 / Ern McQuillan (3665)
2. [Liner Oriana at the International Terminal with The Bridge behind], 1960's / Ern...