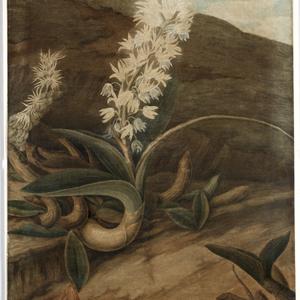 Notes: Richard Read Junior was at 39 Pitt Street in 1822 : see Sydney Gazette 15 March 1822 From Curator's acquisition notes, 2004: Richard Read Junior (1796-1862) was a professional artist, who emigrated to Australia in November 1819. His father, Richard Read Senior and also a professional artist (a miniature and animal painter), has preceded him in 1813, transported for fourteen years for forgery. Both seem to have been professionally trained. Read Juniors early advertisements suggest the range of genres and activities a colonial artist was obliged to offer. The range of his early practice is defined in his Sydney Gazette advertisement of 24 February 1821 in which he describes himself as a Miniature, Portrait and Historical painter, noting too, that he had no connection with any other person of the same name in the profession an obvious attempt to distance himself from his father. He also noted that he had for sale a most elegant collection of Drawings consisting of Natives of New Zealand and New South Wales, Views, Flowers &c which he flattered himself were not to be equalled in point of accuracy or neatness. His advertisement for 15 March 1822 listed him at 39 Pitt Street, and noted that he had for sale an elegant Collection of Drawings, consisting of Natives, Views, Flowers &c &c of New South Wales, finished in a very superior manner, and considerably cheaper than any that are now selling in the Colony. Interestingly his father advertised a near identical range of imagery, suggesting such images were particularly suitable for Captains of Ships, and other Gentlemen (Sydney Gazette, 17 February 1821). The market for these large scale watercolours was very much the colonial elite. However surprisingly few of these indigenous or natural history watercolours have survived. "King Parrot, Musk Lorikeet and Eastern Rosella" (ML 1142), two native portraits and a fairly basic ornithological drawing, all by Read Senior, are the only other illustrations of this genre known. While a number of both Read Junior and Senior topographical views can be found in institutions, including the Mitchell Library, "Rock Lily of New South Wales" appears to be the only surviving natural history illustration by Read Junior. "Rock Lily" is larger, and more conceptually elaborate than Read Senior's work. Perhaps reflecting the changes brought to the colony by mass immigration from the 1820s, and a shift in its self-perception or definition, Read's advertisements for topographical and natural history illustrations do not carry on much past 1822. Instead Read concentrated on portraiture, presumably because of the greater demand for it from a burgeoning middle class. From the late 1820s onwards he was known exclusively as a prolific watercolour portrait painter. Indeed his 3 November 1826 advertisement in the Sydney Monitor only offers portraits, and there is no mention of his early views and natural history work. While natural history continued to remain an important point of definition for the colony, from the early 1830s when the colonial elite wished to depict the colony they turned almost exclusively to landscape painters, such as Conrad Martens. Rock lilies (in fact an orchid, Orchidaceae Dendrobium speciosum), a small plant, are reasonably common around Sydney, growing in rock crevasses or trees. The distinctive plant clearly caught the eye of early settlers. The first depiction of it came from John Hunter, in his Birds and Flowers of New South Wales c. 1788 (National Library of Australia and later repeated in Robert Anderson Setons copy of that album, Drawings, PXA 914). George Raper also made two other versions of this drawing, one in the Raper Collection, Natural History Museum, London (drawing 48) and the other in PXD 17 f.28. Few other drawings of it are known from this period. The Library has one, by a little known Irish convict artist Andrew Doyle, which might date from the 1810s or 20s (SV*/BOT AUS/23). "Rock Lilys" dramatic, indeed exaggerated, composition is indebted to the example of Robert Thorntons Temple of Flora (1799-1807). Plates such as The Superb Lily, by Philip Reinagle, or the Nodding Renealmia by Peter Henderson, suggest themselves as compositional templates for "Rock Lily of New South Wales". In many ways "Rock Lily of New South Wales" also continues the genre developed by John William Lewin (1770-1819), who arrived in Sydney in 1800. Lewin, a professional natural history artist, moved from diagnostic illustrations to, by 1810, large scale emblematic illustrations of the most dramatic and curious natural history specimens of the colony. His watercolours were presented as works of art rather than scientific illustration and were said to hang around the walls of Government House. "Rock Lily of New South Wales" similarly makes art out of natural history. Yet it is also perhaps the climax of the genre "Rock Lily" appears to be one of the last of its type with no other similar conceived works single specimens the focus of a work of hight art of a later date surviving. It signpost the change of the colony from a convict settlement, into a fledgling free colony. Ambitiously conceived, it reflects a then typical way for the colony to present itself. Using a composition derived from one of the high points of European botanical illustration the Temple of Flora to depict a local plant suggests a comparatively confident colonial society which could, in this sort of context, offer up its natural history for comparison with the rest of the world. Digital order no:a128721