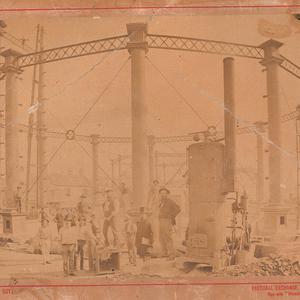 Notes: ""One of the first gas holders to be erected for the Australian Gas Company at the rear of Haymarket Anthony Hordern's Store (the orig. store was later destroyed by fire). The donor's father was foreman of the works on this job, and contractors were Lewis & Co., Marion St., Pyrmont"" -- Information from donor Reproduced in: First light : 150 years of gas / Rosemary Broomham. Sydney : Hale & Iremonger, c1987 (p.68) Caption: `C. Lewis' construction team built the largest holder at Haymarket. It dominated Pitt Street South from 1879 to 1916' Dated from City Photo Co. (Hunter Street, Newcastle) entry in: The mechanical eye in Australia / Alan Davies & Peter Stanbury. Melbourne : Oxford University Press, 1985 Digital order no:a089479 This item has been catalogued and digitised under a project funded and supported by the State Library of New South Wales Foundation, 2001.