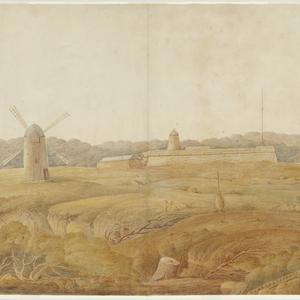 Notes: Title from mount Signature does not seem to be contemporary and is inaccurate as Taylor did not arrive in Australia until 1817. It however is probably by Major Taylor as the companion picture in the volume is very like the 3rd plate of his Panoramic views of Port Jackson and is probably the original sketch. This is one of four watercolours by Taylor of which three were published as aquatints in 1823 with the title `Panoramic views of Port Jackson', also known as Major Taylor's Panorama. The three watercolours by Taylor taken from the same viewpoint form a 360 degree panorma of Sydney. This is the fourth, unpublished view which faces north. The watercolours may relate to a panorama which was exhibited at Barker & Burford's Panorama Building in Leicester Square in London in 1824. See: Canvas documentaries : panoramic entertainments in nineteenth-century Australia and New Zealand / Mimi Colligan. Carlton South, Vic. : Melbourne University Press, 2002, p.33 The west view of the panorma `Cockle Bay now Darling Harbour' is located in the Mitchell Library at ML 941. The other views of the south and east, corresponding to pl.1 and 2 of the aquatints, are held in a private collection but are illustrated, with commentaries, in McCormick ... [et al.], cited above. Colour transparencies are held in the Mitchell Library at FM5/1210-11; not to be reproduced without permission of the owner For further information about Taylor's watercolour drawings and the aquatint panorama engraved from them, see his entry in The Dictionary of Australian artists : painters, sketchers, photographers and engravers to 1870 / edited by Joan Kerr. Melbourne : Oxford University Press, 1992; A rage for curiosity : visualising Australia 1788-1830 / Richard Neville. Sydney : State Library of New South Wales Press, 1997; and McCormick ... [et al.], cited above Formerly bound with his Cockle Bay now Darling Harbour with general cover title `Views in Sydney Harbour (D 308)'. Removed from binding and transferred from D 308 to ML 942, 1985 Digital order no:a1528797

This is the fourth and unpublished view in the series which faces north. It shows the third government mill (Smock-Mill) in front of Fort Phillip with its signal station and the stump of the colony's first windmill. In the distance to the right is Fort Dawes with Greenway's Battery, -- Reference: First views of Australia 1788-1825 : a history of ea...