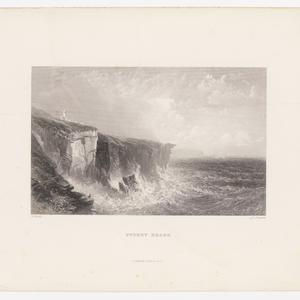 Notes: This image appeared in "Australia", by Edwin Carton Booth, illustrated with drawings by Skinner Prout, etc. London: Virtue, 1873-1876, vol. I, p. 105. Date of work taken from publisher information of book. ML DSM/Q980.1/46A1 v.1-2. The image is similar to 'The Heads of Port Jackson' which appeared in 'Sydney illustrated'. The view, which is taken from the cliffs, a little to the south of the Light House shows the entry into Sydney Harbour.