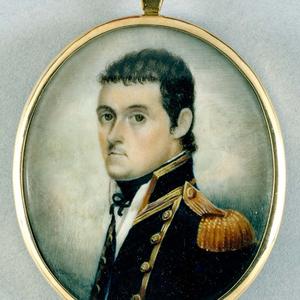 Contents: Drawings - 6 x 4.9 cm - 1 watercolour on ivory miniature : on obverse, backed with another thin piece of ivory and held together by a metal 'ribbon', is a lock of hair. Case and framing are twentieth century.

Notes: At some point, at least before 1945 when it was noted as being separate from the miniature, a piece of card - cut to the size of miniature - was presumably used as some kind of backing or support. The card is probably a trade label, and on it is printed "Edward Davis, Gold and Silver Bright Engraver, No. 8, Short Buildings, Clerkenwell". It is now kept with the miniature. The pre-1961 construction of the miniature can be seen in an undated copy photoprint at Frame no. GPO 2 13717 - you can go to this image through the related works field of this record. The current miniature case is one of a type used by Freeman's Studio, Sydney, between the 1920s and the 1960s. Freeman's Studio undertook minor restoration of the miniature in 1965. According to notes compiled by an earlier Library officer a circlet was made for the miniature in 1961: this was then strengthened with the addition of a gold circlet in 1965. An engraving after this miniature was published in "The Naval Chronicle for 1814, from July to December, vol. 32" opp. page 177. Neither the artist nor the date of the original is given. Digital order no:Album ID : 846721

ca. 1800 (dated by a period of Flinder's residence in England)