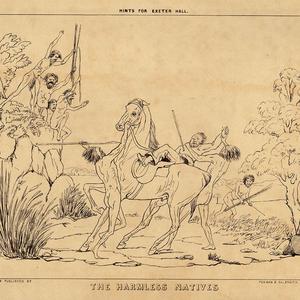 Full title: The persecuting white men / The harmless natives [lithographs by George Hamilton of conflict between European and Aboriginal people]

Notes: Attributed to Hamilton after comparison with signed drawings by him cf. "Overlanders attacking the natives" V/89 - Mitchell Library Dated from year Penman and Galbraith began operating in Adelaide to time the company moved to Freeman Street in 1856 - it has not proved possible to identify during which years the firm operated from Pirie Street, but from 1856 onwards it is listed (Adelaide City & Port Commercial Directory and Almanac, 1856) firstly in Freeman Street, and then Rundle Street till 1874 when it moved to Currie Street. In 1880 the firm relocated for the last time to Gresham Street. A number of these lithographs were later republished in Dublin by E.J. Harty, 9 see "Hints of the colonies" Mitchell Library reference number F741/H Exeter Hall, which opened in the Strand (London) in the early 1830s, was designed as a meeting hall for religious and scientific groups. Regular users included many evangelical groups such as The Ragged School Union, the Bible Society, the Anti-Slavery Society and the Temperance Society. Digital order no:Album ID : 846747