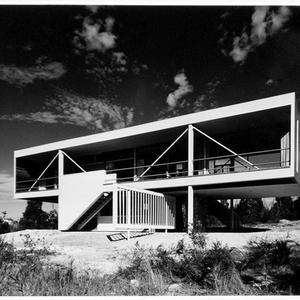 Notes: The Julian Rose House is one of three designed by Harry Seidler for a bushland site overlooking Kuring-gai Chase. Often confused with the Rose Seidler House which was designed for Seidler's parents, the Julian Rose House was originally designed for his brother Marcell Seidler, and was eventually designed for friends of Seidler's parents to live in. Marcell, a photographer, introduced Max Dupain to Seidler, who remained a lifetime client of Dupain's . 'I think that's the first thing he photographed with me ... its a classic." -- Harry Seidler, 1997. This picture was previously incorrectly titled: '[Julian] Rose House, Turramurra, by architect Harry Seidler, 1950' Digital order no: pxd72013