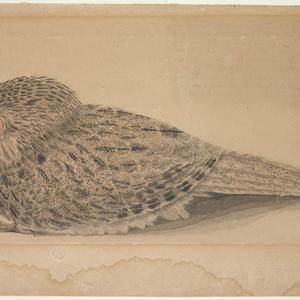 Notes: In the second half of 1807, John William Lewin, the first free-born professional artist in New South Wales to make a living from painting, appears to have received a series of private commissions for natural history drawings of local species from the Governor, William Bligh. After January 1808 when Bligh was deposed in the Rum Rebellion, these commissions from him to Lewin seem to have ceased. Like a number of the officers who came to administer New South Wales in its first decades of European settlement, Bligh was intensely interested in the colony's novel fauna and flora and sought to have visual records made of these exotic species for his private collection. From his arrival in Sydney in January 1800 until his death in August 1819, Lewin's artistic services were employed by all three Governors and the Lieutenant-Governor of the period, as well as merchants (eg. Alexander Riley) and military and administrative officers (eg. Surveyor-General John Oxley; Lieutenant Alexander Huey) for both official and personal commissions. The Library holds several of Lewin's watercolours for Bligh done in 1807. (See Related Works below). In addition, the Art Gallery of New South Wales has another from this group, Variegated Lizard of NSW, 3 December 1807 and Entrance to the Coal River, 11 December 1807 is in the Newcastle Region Art Gallery. Two watercolours of koalas (now in the Natural History Museum), which Bligh sent to Sir Joseph Banks rolled up in his daughter's drawings in November 1807, are others from this prolific few months in Lewin's output. (See Rienits, Rex and Thea, Early Artists of Australia. Sydney, Angus & Robertson, 1963, p.133 and p.234. endnote V.2 no.12) The large scale watercolour of the Juvenile Tawny Frogmouth is another from this suite. While unsigned, it may be firmly attributed to Lewin on the basis of a quite detailed pencil inscription of nine lines in the upper right section describing the appearance and habits of the bird, recorded in the inscription as 'The Night Hawk'. The inscription now faded and almost illegible, was examined and transcribed on behalf of the Library at the Art Gallery of New South Wales' Conservation Department in November 2004. When compared with other (scarce) examples of Lewin's handwriting, the inscription may be confidently stated to be in his hand. It represents one of the most substantial extant example of Lewin's handwriting apart from his letter to Alexander Huey, now in the Public Record Office of Northern Ireland. (Photocopy of the original manuscript letter available at PXn 674). The watercolour differs from other works produced by Lewin for Bligh, and indeed for his other clients in the colony, in that while its scale is equivalent to his larger finished works, the execution is more akin to a study drawing. The pencil inscription concurs with this hypothesis in giving considerable information and a pseudo-scientific description of the bird to assist with its identification. Equally, the lack of Lewin's usual elements on a finished work, such as ink ruled borders, signature, date and title reinforces the idea. Nonetheless, the artist has given close attention to details such as the handling of the downy feathers of the young bird using a stipple effect and careful gradation of tones and brushwork to replicate the coloration. The general style concurs with other original examples of Lewin's bird drawings held in the Mitchell Library and other collections. This may well be the first visual record of a Tawny Frogmouth. Another early depiction exists in the 1813 compilation known as the Skottowe Manuscript which comprises drawings by the convict artist Richard Browne for Lieutenant Thomas Skottowe in Newcastle, NSW (original located at SAFE/PXA 555 f.24). A handcoloured lithograph of the Tawny Frogmouth is included as plate 39 in John Gould's Birds of Australia. -- From Curator's acquisition notes, March 2005, ML 05/146 Digital order no:a928298